Solar Orbiter: unprecedented images of the sun made possible thanks to the multilayer mirrors developed by the Laboratoire Charles Fabry

Capturing high-quality images at extreme ultraviolet (EUV) wavelengths (about 20 times shorter than visible light) is very challenging and requires state-of-the-art optical components. Based on 40 years of experience in the development of EUV optics, Laboratoire Charles Fabry[1] (LCF) designed and fabricated EUV multilayer mirrors with unprecedented performance for the EUI instrument[2] aboard Solar Orbiter.

With a surface roughness less than 0.1 nanometers and a figure error less than 1 nanometer, the mirror substrates aboard the Full Sun Imager (FSI) and the High Resolution Imager (HRI) telescopes are among the highest quality optical surfaces in a space borne instrument. 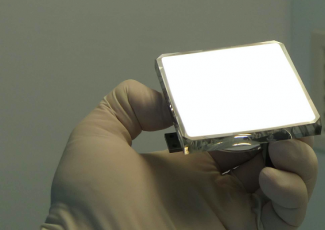 Multilayer interference coatings based on a new material combination (Aluminum/Molybdenum/Silicon Carbide) provide world record efficiency at 17.4 nm. The combination of primary and secondary mirror coatings on HRI reflects twice more photons than the coatings developed by LCF for STEREO, a NASA mission launched in 2006.

Most importantly, for FSI, we developed the first dual-band coating for an EUV telescope, to be able to reflect most efficiently two solar emission lines (Fe X at 17.4 nm and He II at 30.4 nm).

The mirror substrates were made of quartz glass and were produced by high-precision hand polishing of a sphere followed by ion-beam aspherization. Multilayer interference coatings were deposited by magnetron sputtering in a clean room environment with a thickness accuracy better than 0.01 nm and a thickness uniformity on the mirror surface better than 1%. LCF is the only institution in the world that is able to produce both state-of-the-art substrates and multilayer coatings, in their entirety, for an EUV instrument.

EUI/Solar Orbiter Team at LCF since 2008: