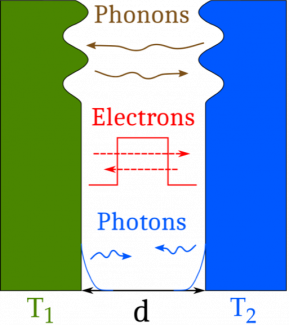 Two solid bodies at different temperatures and separated by vacuum exchange heat in the form of thermal photons. This exchange is limited in the far field by Stefan-Boltzmann’s law. In the near field (when the distance between them is smaller than the thermal wavelength), the flux can overcome this limit by several orders of magnitude due to tunneling of photons, in particular when the materials involved support surface resonant modes of the electromagnetic field. This scenario changes dramatically in the extreme near field (in the nanometer and sub-nanometer range of distance), where phonons and electrons are expected to give a significant contribution to the energy exchange. Moreover, the description of radiative heat transfer has to be modified in this regime, in order to correctly account for the non-local response of the materials involved. Apart from its fundamental interest, this topic deserves indeed to be explored both inspired by the ongoing miniaturization of technological devices and by recent experiments having obtained contradictory results in this regime of distances.

The purpose of the ANR project NearHeat, a collaboration between Laboratoire Charles Fabry (Palaiseau, France) and Institut Lumière Matière (Lyon, France) is to develop a general theory to describe the relative role of photons, phonons and electrons in energy exchanges at this scale. Exploiting these results, we intend to explore new solutions for breakthrough power-source technologies in the areas of thermoelectric (TE) and thermophotovoltaic (TPV) energy conversion devices, as well as innovative more efficient cooling schemes.

The postdoctoral fellow will first develop a complete theoretical framework to describe the energy transfer in the extreme near field based on a mesoscopic approach and taking into account photons, phonons and electrons as energy carriers. Concerning the radiative contribution, the approach will be based on the theoretical framework of fluctuational electrodynamics. A specific attention will be devoted to the role played by non-local properties, assessing the limits of validity of the conventional mesoscopic theory. The role of phonons will be described by means of a long-wavelength theory where the exchange of phonons is mediated by van der Waals forces. Finally, a Landauer-like approach will be employed for electrons, based on the knowledge of the tunneling probability of each electron through a barrier [R. Messina et al., arXiv:1810.02628]. These results will be compared with the ones resulting from a microscopic approach developed by the colleagues at Institut Lumière Matière.

The postdoctoral fellow will then exploit this tool to understand the dependence of the multi-channel transfer on the distance and on external biases (such as a bias voltage or a modulation of chemical potential). This will serve as basis for conceiving innovative TE devices and TPV cells, as well as more efficient cooling devices.

A PhD in condensed-matter physics, materials science, mechanical engineering, or a related area with an expertise in nanoscale heat transfer. An experience in near-field field theory and fluctuational electrodynamics is needed. Experience with high-performance computing would be a plus.

Salary: around 3200€ per month (gross income, before tax)