A history of quantum entanglement 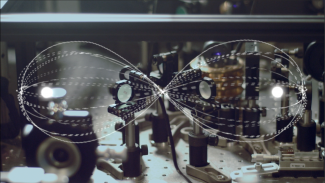 Quantum entanglement is a phenomenon that links intimately the properties of two particles, regardless of the distance between them. This leads to such strange predictions that Albert Einstein himself doubted it! The debate was settled in 1982, when Alain Aspect carried out an experiment at Institut d’Optique (France) demonstrating the physical reality of quantum entanglement with particles of light (photons). Since then, entanglement has become an essential tool for developing high-performance cryptography devices and designing quantum computers.

At Institut d’Optique Graduate School (France), researchers are still studying this fundamental quantum phenomenon. By entangling increasingly complex particles, such as atoms or plasmons, they are able to extend its scope to new fields of physics. This video was realized within the framework of the CNRS’ 80th anniversary. It retraces the history of this strange phenomenon, from the conceptual debate of the 1930s to contemporary experiments carried out in laboratories.